A teenage girl watching a punk-band’s gig thinks to herself, “If they can do it, I can too.”

Or maybe, after the final notes ring out, some little dude in the crowd tells his bros as they’re leaving, “Man, I want to be up there on that stage.”

Ah, the power of an all-ages show.

Huntsville’s local music history is rich with such underground gigs, at the National Guard Armory, Underground Skatepark and other random places, featuring bands with names like Random Conflict.

Jason Ryle and Christine Metz, two of the partners behind a new all-ages venue, called TrashBone, hope to tap into that energy. “The young crowd is the crowd that drives creativity,” Ryles says. “You get a lot of young people around, you get movement, you get birth, you get new stuff and that’s kind of what we’re after.” 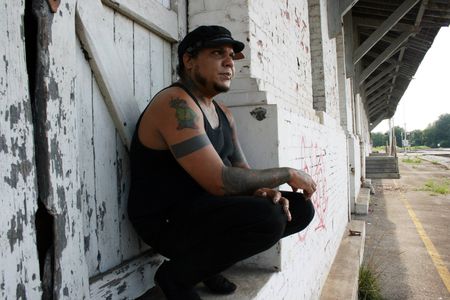 An Alabama punk-rock hero who’s gone but not forgotten

Drummer Mike Horgan was a fixture of Huntsville’s music, bar and restaurant scenes.

TrashBone is located in a long weathered cinderblock building at 2906 9th Ave., near the Lowe Mill arts center. On a recent afternoon, Ryle and Metz, who are also a couple, are standing next to the stage inside TrashBone. They’re both wearing Converse Chuck Taylors. The room here oozes DIY grit. Scratched up gray concrete floor. A few old chairs, tables and couches. Walls decorated with empty picture frames. A sculpture assembled from a leaf blower and pressure washer parts.

The TrashBone stage is about the square footage of a small bedroom and maybe a foot off the crowd. Behind the stage, a mural, painted by Chase Ocampo, depicts three local musicians who’ve died: Mike Horgan, drummer from touring band Cancerslug; Justin Isbell and Bill Valentine, drummer and bassist with Chason Jason, a band Ryle played guitar in.

The venue held its first show this Labor Day. The bill boasted local bands The Dirty Swagger, Bone Zone, Frankenf—s, Black Mask and Shattered Monsters. During Dirty Swagger’s set, the Iggy Pop inspired band’s frontman ended up out in the crowd, “on top of a table, hanging from the ceiling, licking the walls, ripping his clothes off,” Ryle says with a laugh.

More than a 100 people attended the debut show here, Metz says. They ranged in age from early 20s to 60s. “All of our grass was parked with cars,” she says. “All the street, up and down, was parked with cars. People in line screaming, ‘Punk rock !’, out their car windows and trying to find a spot to come in here. It was pretty cool.” She adds the crowd inside TrashBone was “very respectful. They didn’t leave any kind of mess. When they left it looked like it does now.” During shows, a roll-up garage door to the side of the stage is opened to keep the vibe “as COVID aware as possible. ” Ryle says the venue will also “hand out face masks if needed.”

TrashBone is operating as a private club. You can buy a membership for $20 a month or a day-pass membership for 10 bucks. For now, they’re planning on doing a show a week or so. Shows will be on Saturdays and start around 4 or 6 p.m. If you’re 21 or over and want to drink alcohol, TrashBone is a BYOB (and bring your ID) scenario. Ryle says the building is zoned residential/commercial. (Nearby Gold Spring Coffee has hosted live music, as does, of course, Lowe Mill.) He says they have a business license for TrashBone. Asked if they’re required to have some kind of permit, Ryle says, “It’s private event, so we don’t really have to go that route. We’re not selling alcohol. We’re just going to sell music.”

Salina Brilla, whose booked bands at places like local punk spot Copper Top, is another partner in TrashBone. Brilla has a passion for pairing touring bands with local acts, Ryle says. “Salina is a huge part of putting this all together,” he says.

Ryle and Metz are from Orange County, California, also home to one of their favorite bands, reggae punk trio Sublime. The all-ages shows they attended as youths were sometimes held in church cafeterias. The couple has resided in Huntsville for about 10 years now. They came up with name TrashBone after one of their dogs, named Lady Bug, found a bone in the trash. They’re also planning on using that appellation for a web reality show about “competitive dumpster diving.” Ryle and Metz also operate a sort of thrift store/eBay store, selling everything from iPhone cases to antique furniture, out of another smaller building on the same lot as their all-ages venue.

Huntsville musician Michael Kilpatrick played all-ages shows while coming up with bands such as Monster Dog, at the Armory and other spots. In addition to being a place where underaged fans can hear live music, all-ages shows give young bands a place to perform. “That was my lifeblood of gigging before I was able to get a show at a bar,” Kilpatrick says. Other local groups Patrick’s played in include the Snob Doctors, Frigidaires and, most recently, The Go-Go Killers. A few years ago, he scored a gig as a touring musician with his favorite all-time bands, seminal Los Angeles punks X.
All-ages venues also build a cooperative vibe among local DIY-minded bands, Kilpatrick says. “Sharing gear, cobbling together PA systems, and comparing notes on like-minded venues and people in the community to know. Lifelong friendships were forged at these shows.”

TrashBone’s next show is Oct. 3. Local combos Casket Kids and the returning FrankenF—s are scheduled to perform, with an opening set by Skeptic?, from Birmingham. It’s the first in a series of “battle of the bands” type gigs, with two local group vying for the prize of “street cred” and a spot on the venue’s Halloween show. (An out of town band will be the support act on each of these shows but won’t be involved in the “battle of the bands.”)

Ryle and Metz are on a shoestring budget with TrashBone. And they’ve pushed every chip they have to the center of the felt. They’re even temporarily living in a makeshift apartment inside their store on the property. “We’re just taking a chance,” Ryle says, “and going with it.”

Article written by Matt Wake and published in the Huntsville Times and on AL.com. Link to article: https://www.al.com/business/2020/09/new-huntsville-all-ages-music-venue-ready-to-rock.html